Dr Nicola Rollock is Reader in Equity & Education at Goldsmiths College, a writer and consultant. She gave a fascinating lecture, hosted by HudCRES, on the 12th February, entitled Towards and racially just higher education: Mission Impossible?

Introducing her lecture, Dr Rollock commented that her title and subtitle were open to interpretation. She went on to outline the current picture in stark terms. 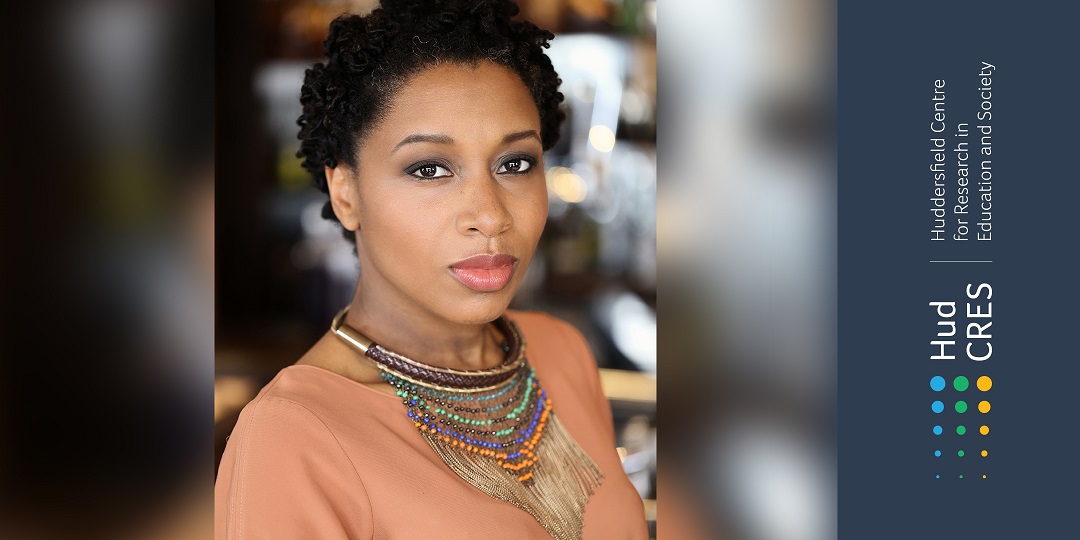 The UK’s universities do not have a good track record on race. The achievement gap between White and BAME students was highlighted by the Office for Students: far more White students achieve good degrees. This had long been known but it was not addressed until the OfS required action to be taken.

Staff are impacted as well as students. A year ago, Dr Rollock produced the report Staying Power for the UCU. She investigated the career experiences and strategies of UK Black female professors. The 20 participants had encountered a complex nexus of negative forces comprising not only professional obstacles but workplace behaviours undermining personal well-being.

The staffing issue has been known for a long time yet the figures are still shocking:

The Equality and Human Rights Commission’s 2019 Inquiry Racial Harassment in Higher Education identified a lack of meaningful enforcement. Universities thought they handled complaints well but actually put their reputations above safeguarding students and staff. The EHRC found that many instances of racism went un-reported. Hence universities’ knowledge was incomplete.

Over twenty years ago (February 1999) The Stephen Lawrence Inquiry’s recommendations were intended to implement zero tolerance for racism in society and to put measures in place to ensure change in public bodies. Including universities.

Part of Universities’ continuing response to racism is the constant collection of data intended to provide a comprehensive understanding of the situation. The time-consuming focus on the expression and exploration of statistics provides a screen for the maintenance of White dominance. Meanwhile BAME staff and students continue to endure passive bullying and micro-aggressions.

BAME women in academia (whether students or professors) experience university as ‘a battle’. Responding to a question from a ‘tired’ young woman in the audience, Dr Rollock advised her to ensure she built a ‘battlefield medical kit’ to support her own health and well-being. This could comprise anything from yoga to horse-riding, from spending time with family and friends to therapy.

Dr Rollock’s outlook did not feel optimistic. Any organisation long-established by White people inevitably has procedures which benefit White people. For the School of Education and Professional Development this means almost all of us. Our School’s Equality, Diversity and Inclusion Committee has tended to focus on gender (producing a submission for Athena SWAN) and (dis)ability. White women form the majority of the Committee’s members so the emphasis on personally less challenging issues is perhaps no surprise.

Dr Rollock concluded that the ‘racially just’ university would not wait for external push factors to initiate change. It would engage seriously with students and academics. It would embrace a culture and curriculum very different to current provision. 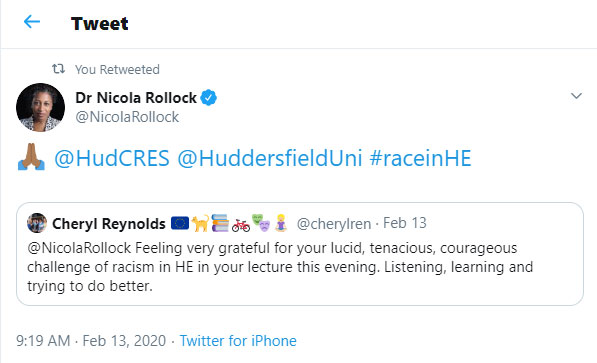 Advancing racial justice needs to go beyond ‘symbolic acts’. This means that White people need to move beyond ‘discomfort and denial’ to achieve a change which is ‘radical and enduring’.