Ken Loach’s film, Sorry We Missed You, tells the harrowing tale of Ricky, Abby and their family’s attempts to get by in a precarious world of low paid jobs and the so-called “gig economy”.

But how realistic is it? Can Loach’s film be accused of undue pessimism? After all, UK government ministers have applauded the gig economy and the freedom and flexibility of being an “everyday entrepreneur”.

A new study by myself and employment expert Andreas Giazitzoglu investigates what we know about the gig economy, in order to get a clearer picture of what is really going on in the contemporary world of work in the UK.

This article first appeared in The Conversation on 1 November 2019

Narrowly conceived, the gig economy means workers (as independent contractors) doing discrete, short-term tasks – or “gigs” – for companies via digital platforms such as Deliveroo, Amazon or Uber. As one study describes them, these are “labour contracts that are as temporary as is possible for them to be”.

We argue that it is better to see the gig economy as part of a wider shift towards insecure forms of work. Long-term unemployment is no longer a serious social policy problem, but standard, full time, long-term employment is also much less common.

More and more people are churning from “one shit job to another shit job”, as Ricky puts it in Loach’s film, punctuated with periods of unemployment. And as Loach observed (in a Q&A session following a preview), Sorry We Missed You is a sequel to the 2016 film I, Daniel Blake, which explores the degradations of the UK’s benefit system.

These are two sides of the same coin, as research on “the low-pay, no-pay cycle” has shown. Many of these jobs are on zero-hours contracts, which although illegal across much of the EU, have boomed in the UK.

Employers insist that workers want this “flexibility”. But two-thirds would prefer a fixed-hours contract.

Sorry we missed you - official trailer.

The government celebrates high levels of employment but two-thirds of employment growth since the 2008 financial crash has been in self-employment or other forms of “atypical work”. Much of this self-employment appears to be bogus. Just like in Sorry We Missed You, employers designate workers as “independent contractors” to cut wage costs and employment rights.

Even a government inquiry found that “some companies are using self-employed workforces as cheap labour”, damaging workers’ well-being in order to “increase profits”.

If not bogus, then much self-employment is likely to be “forced”, perceived as the only alternative to being unemployed. This was typical of the “young entrepreneurs” I interviewed in the 1980s.

Held up as role models for Margaret Thatcher’s “enterprise culture”, their ambitions were, in fact, much more prosaic. Rather than go on the dole, they used the (recently re-launched) Enterprise Allowance Scheme to set up “micro-businesses” – knitting jumpers, repairing bicycles, freelance photography – keeping going by undercutting other businesses and by gross self-exploitation. Very few succeeded over the long term.

Most plodded along until, exhausted, demoralised and in debt, they closed down their businesses. Low pay is also typical of more recent forced self-employment and has been a key factor in the UK’s shift towards low paid work. 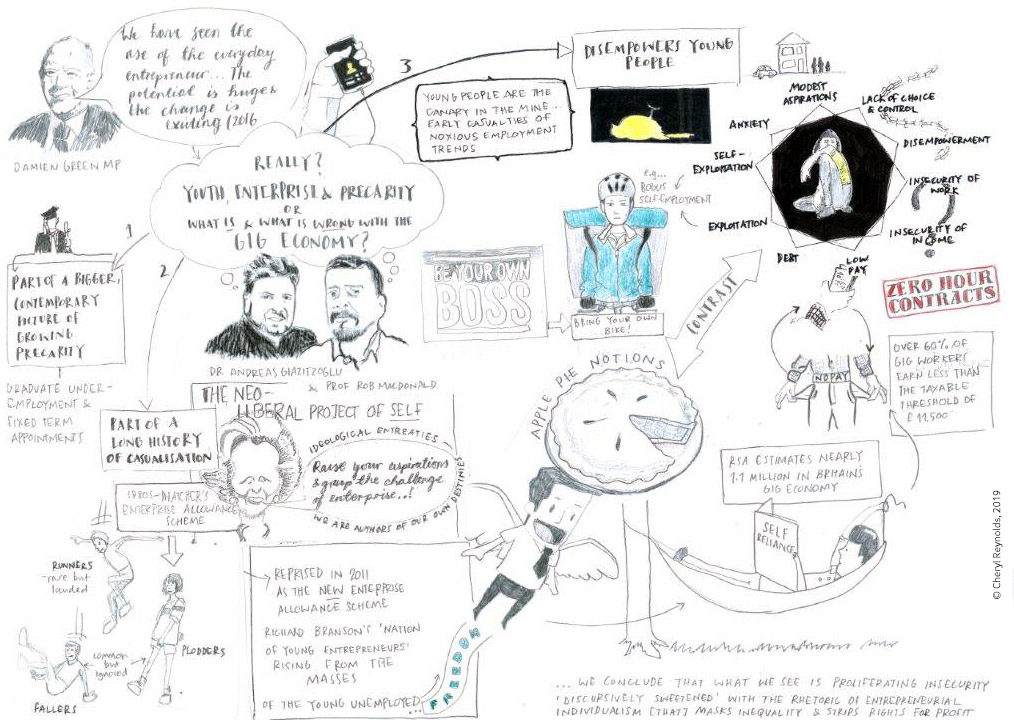 Across the research, we found ten things that were common to workers’ experiences of this new, insecure labour market:

One of the duties of critical social science is to question fashionable ideas. We should be particularly alert when comfortably placed, middle-aged politicians exhort younger people to “take up opportunities” that they themselves would never dream of going near.

Would government ministers be quite so “excited” about the gig economy if they had to surrender their fixed salaries, paid holidays and pension schemes in favour of working a daily schedule so gruelling that toilet stops are impossible and the minimum wage cannot be earned?

All of us – the public who rely on the services of the gig economy just as much as the politicians who proclaim its virtues – need to wake up to the reality that, in this instance, “flexibility” is just another word for exploitation.