This recent event, convened by the British Educational Research Association (BERA) Literacy and Language Special Interest Group and at which I was one of the speakers, comprised papers originally intended to be part of the 2020 BERA Conference.

As a result of the pandemic, it was offered as a free, online event open to all. One of the main advantages of this was that over half the delegates were practitioners, split between Early Years, Primary and Post-Primary. Academics made up just over 40%.

Phonics – in particular, policy on the place of phonics in the teaching of early reading – is a perennially hot topic as the presentations illustrated.

It lends itself to strong views and fierce debate which many others have rehearsed (e.g. Soler, 2017). The papers presented illustrated different aspects of this debate, and the level of interest was high with 177 delegates signed up to attend. 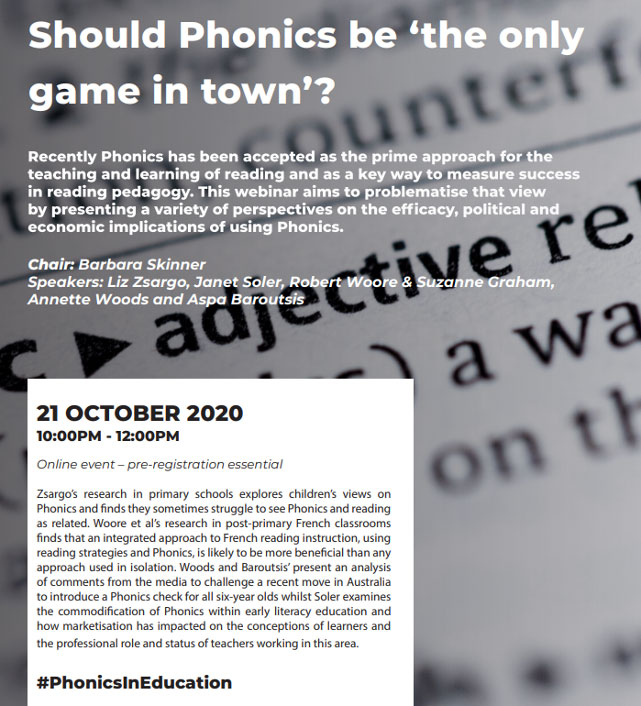 Research by Professor Annette Woods (Queensland University of Technology) and Dr Aspa Baroutsis (Griffith University) on public Twitter debates about phonics showed how although in theory everyone can contribute to debates on social media, certain voices tend to dominate. Those more committed to the extremes of the debate were more likely to participate, and were more likely to base their opinion on emotional appeals or personal assertions The voices of teachers were rarely raised.

My own research has attempted to allow the voices of another group not often heard within the debate: those of children.

Through a small-scale interpretive study based on activity-oriented interviews carried out over a year, children aged between five and seven were asked for their views on learning to read in the context of systematic synthetic phonics as the ‘prime’ approach. My early findings suggest that children are strongly aware of phonics as a subject, but do not tend to link it to reading; conceptual links to writing are stronger. At the same time, when children discuss reading, they emphasise sounding out the words and, importantly, doing this correctly. Getting it right is seen as crucial and key to being a good reader. We discussed the implications of this including children’s apparently performative understanding of reading at this early age.

The commodification of phonics

Dr Janet Soler (Open University) built on this theme, focusing on the commodification of phonics. The neoliberal policy turn with increasing managerialism and marketisation was discussed, associated with a strong performativity agenda in the public sector. Soler pointed out the problematic nature of the rise of commercial phonics programmes supported by public money, often written by people who were advising the government. Attention was also drawn to the risk of de-professionalising teachers of early literacy: highly structured early years phonics programmes, which perpetuate one view of the teaching of early reading, appear to be a big business opportunity.

Professor Robert Woore (University of Oxford) and Professor Suzanne Graham (University of Reading) presented research showing the benefits of including phonics teaching as an element in foreign language teaching, along with other linguistic knowledge. They found that an integrated approach to teaching French, in which learners received a varied diet of phonics, linguistic strategies instruction and engaging and interesting texts was most likely to effective (Woore, 2018)

A range of approaches to phonics is needed

Discussion between and after the presentations was lively (despite not being able to see the delegates), with many more questions being asked and points being made than could be fitted into the time available.

A poll asked about delegates’ view on the teaching of early reading. Delegates were largely split between two responses: a balanced approach with phonics as an integrated element (43%), or, with the highest percentage: a range of approaches dependent on needs, which may or may not include phonics (46%). Only just over ten per cent of delegates thought that phonics should be taught as a discrete, systematic element, and no delegates supported the phonics ‘first, fast and foremost’ approach espoused by current government policy.

The answer to the question Should Phonics be ‘the only game in town’? from this group of delegates (including many practitioners) was a resounding no.

Watch a recording of the event now

A final poll asking for delegates’ feedback on the event saw 94% rating it as good or excellent.

The organisation and support from BERA was superb and although the ‘in-between and around the event’ discussions were curtailed by the online format, this was balanced out by the pleasure of be able to share and discuss research with so many practitioners as well as fellow academics.