Michel Gove in his role as the Education Secretary in 2012 declared that the Information Communication Technology (ICT) curriculum was ‘unambitious, demotivating and dull’ and it had to be removed from the national curriculum programmes of study. The government reacted to this by dissolving ICT programmes of study and introducing a new computing curriculum which they said would prepare every child with the computing skills they need to succeed in the 21st century.

Fast forward to 2019, and computing qualifications have replaced the majority of GCSE ICT qualifications. This has had a number of repercussions for students in terms of subject choices, attainment and career choices.

The new computing curriculum teaches computational thinking, abstraction, decomposition and focuses on developing student’s skills in coding using programs such as scratch and python, leading to creating individual own programs. ICT on the other hand was very much focused on using existing programs such as excel, word and database.

The transition from ICT to Computer Science in secondary schools has not gone entirely to plan. Many schools didn't have computer science as a GCSE subject option. A study carried out by Kemp et al. (2018) showed that schools/providers that previously ran ICT courses had not necessarily switched to computing. Also:

Furthermore, some schools have chosen not to teach the computing national curriculum requirements at Key stage 3. Perhaps they are ignoring it, hoping that it will go away!

My concern here is that computer science as a subject is being marginalised in many schools/academies and as a result of this will not be preparing young people for the digital and computing skills necessary to live and work in the 21st Century.

In 2018 I set out to establish the perceptions and experiences of Year 8 students across six schools in the north of England, about computer science as a subject and as a career.

I chose to focus on this particular year group as more often than not students choose what subjects they will take a GCSE at the end of this school year. My research was carried out with 142 students, 45% male and 55% female and data was collected by a paper based questionnaire, rather than online, because not all groups had access to computers or devices during form time when the questionnaire was administered. 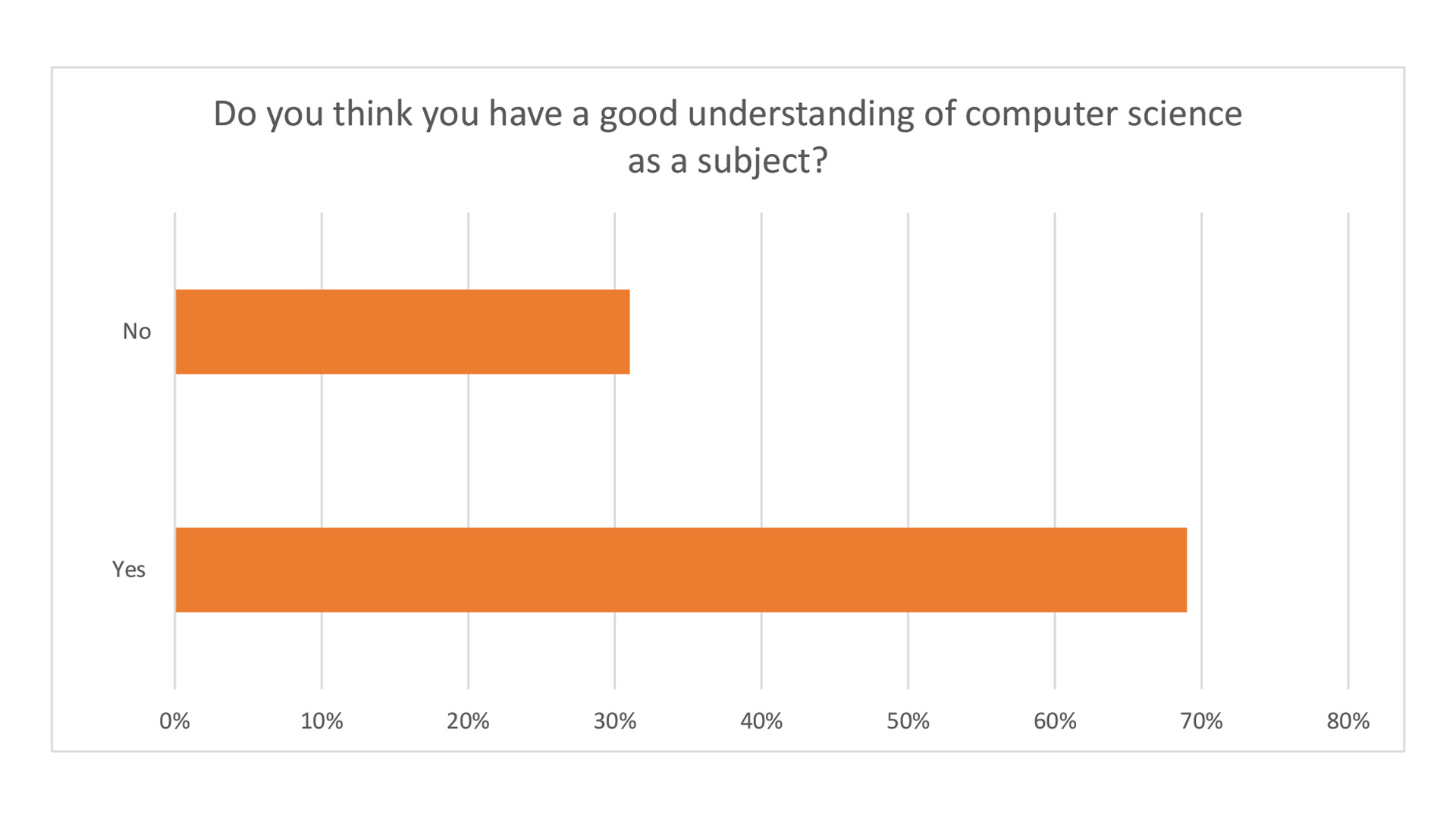 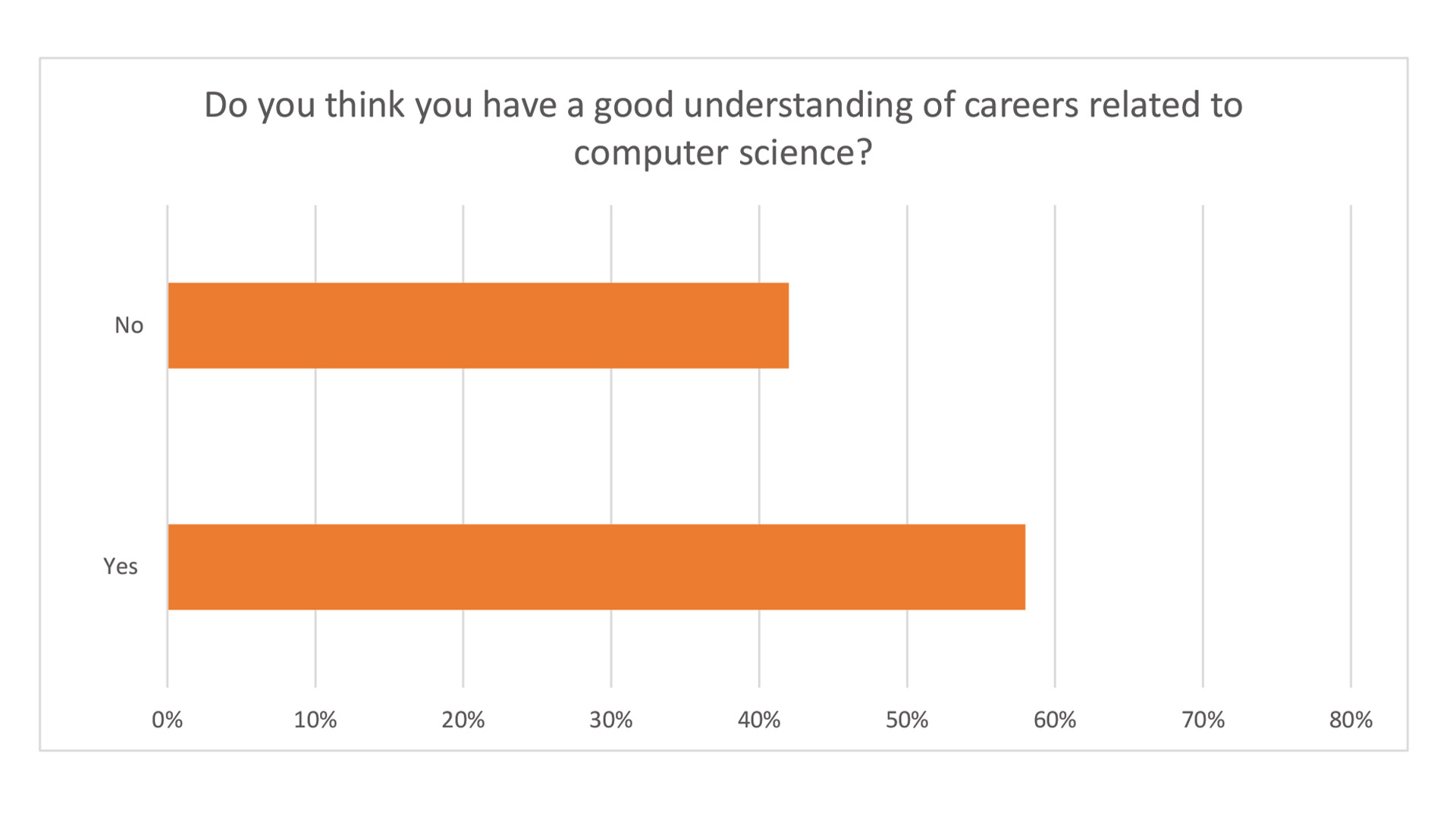 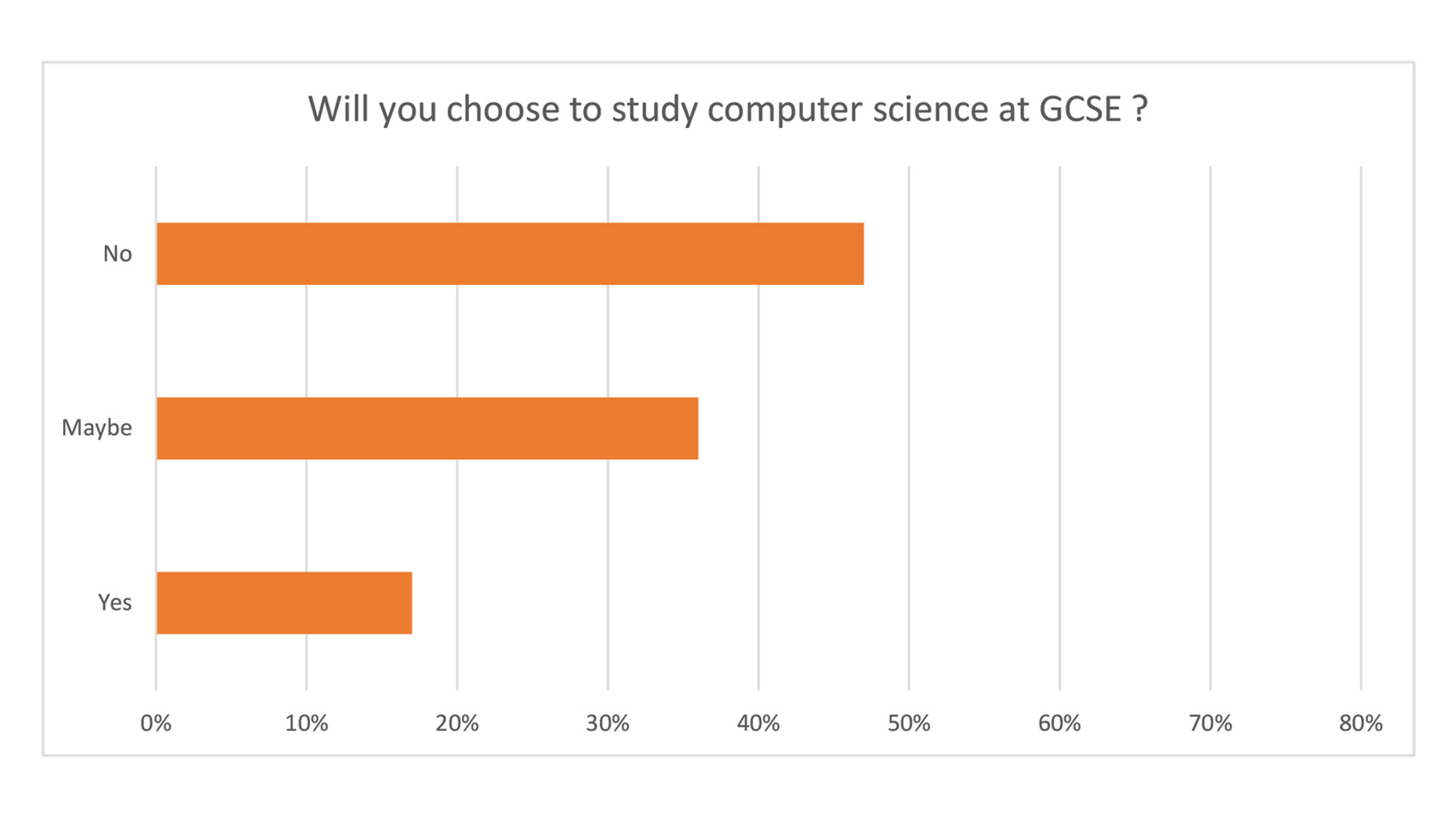 Initially I asked students about their experiences of the subject and whether computer science was something that they might choose to study in the future. Responses appeared positive with around 60% of students responding that they had a good understanding of computer science as a subject and related careers, which is perhaps indicative of students' increased exposure to the subject at both primary and secondary school. Interestingly, though, 30% of students didn’t think they had a good understanding of the subject or related careers, highlighting disparity of experiences, furthermore revealing that some schools are just not teaching the national curriculum expectations for computing at primary and secondary stages. Even more concerning - only 15% of students said that they would go on to choose computer science at GCSE.

So why is this?

Whilst a high percentage (80%) of students had experienced some form of coding/programming in computer science lessons, Bird (2016), in Curriculum experts say coding is essential in a digital economy, suggests that teaching coding purely in a computer science context can appear quite technical and daunting. She goes on to suggest that computer science could be taught cross-curricular, in an effort  to make coding more fun, for example ‘in geography to develop solutions to environmental problems, to tell stories as part of creative writing in English, furthermore to create  presentations or role playing games in personal, social, health and economic education’.

To explore students' perceptions of the subject further they were asked to summarise their thoughts on computer science in three words. Students were asked to write three separate words, not a sentence and no examples were given. A couple of responses were deleted - one student wrote, for example ‘Not for me’ so none of the words were used. One student wrote ‘It is boring’ so the first two words were disregarded.

Many of the responses aligned with a clear positive or negative opinion. There were some words to describe content such as ‘technology’ or ‘programming’ and a substantial section of words which highlighted how difficult they thought the subject was. The most positive words were ‘interesting’, ‘fun’ and ‘exciting’. By far the most common negative word was ‘boring’ while others expressed similar views such as ‘dull’ and ‘bad’. Perhaps worth more interest are those who perceive the subject as ‘confusing’, ‘complicated’, ‘difficult’ and ‘hard’, warranting further investigation to unpick what they perceive as the challenging aspects of the subject.

Students then went on to produce visual representations of how they perceived a ‘computer scientist’. The collection below represents some of their main ideas. 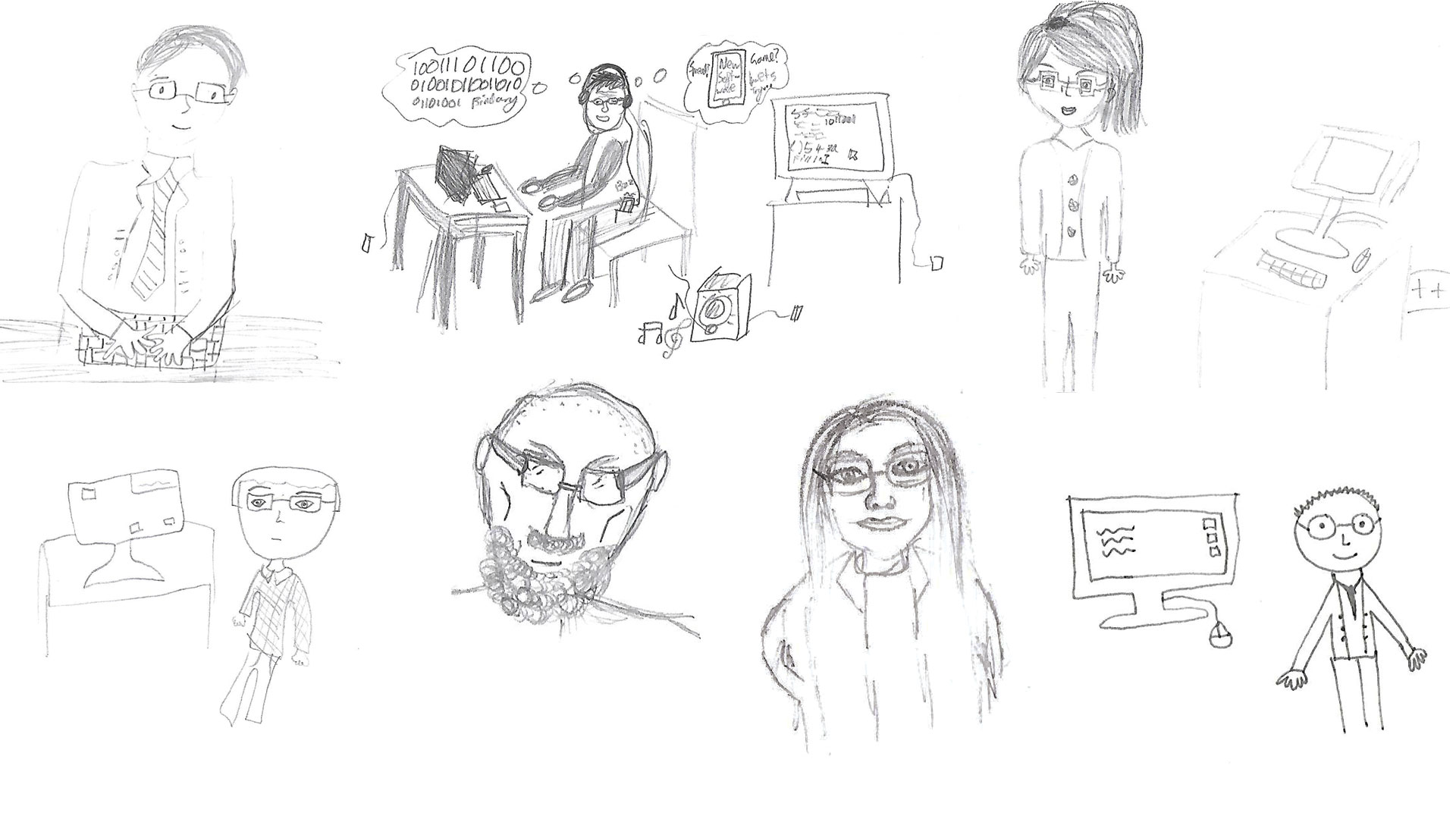 The majority of students drew characters wearing glasses and who were predominantly male.  Considering the high representation of females in the study I was surprised to see only the two images of females as shown above. In the main a computer scientist seems to be perceived as a male role and with a slight ‘geeky’ look.  A number of the characters resemble a teacher-like persona and many were drawn in computer based surroundings.

It is evident that the Year 8 students show a keen interest in technology and computers and feel confident in their use. Whilst a very high number of students are experiencing coding in schools there continue to be knowledge gaps about computer science and related careers and some schools choose to ignore the national curriculum expectations or don't even offer the qualification at GCSE.

Unfortunately lack of experience of the subject or the technical way that computer science is taught is greatly impacting on the uptake of the subject at GCSE and students pursuing a computing career.

Whilst many students perceived computer science as interesting and exciting there are many who find the subject confusing and complicated and this will continue to be a barrier unless we begin to de-mystify these perceptions. In addition, exploring cross curricular delivery and more authentic learning opportunities in computer science may make the subject more engaging and attractive.

Promoting positive female roles in computer science must continue along with developing a ‘cooler’ image for computer scientists, one that young people can relate and aspire to.

The transition from ICT to computer science in secondary schools has not reached its final destination yet! I don’t believe that the government anticipated that the journey would take so long, and more up-front support and development for teachers and schools during this transition might have aided the journey somewhat.

Moving forward we need to ‘think outside the box’ and develop the ‘Interesting’ in computer science in schools.